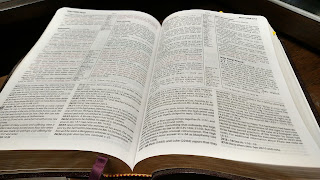 Last Monday we listened to Submission Through Prayer, by James MacDonald. You can read part of the message here titled Honest Prayer. He spoke about four basics of enhancing or quickening your relationship to God through prayer (my words not his), focusing on Matthew 26:36-46.
Using the example of Jesus praying at Gethsemane, he spoke of honest prayer. In Matthew 26:39 Jesus asks, “My Father, if it is possible, may this cup be taken from Me. Yet not as I will, but as You will.” We read Jesus' honest prayer.
Considering the surface a full cup, we not only see what's in it but ourselves peering back, or, at least I imagine we do. I've reflected on this notion in my morning coffee and afternoon tea. What is in my cup? Who am I in Christ? These questions are honest questions. After-all, why would you be dishonest with a cup?
The second concept MacDonald elaborated was submissive prayer. Jesus says in Matthew 26:40, “My Father, if it is not possible for this cup to be taken away unless I drink it, may Your will be done.” MacDonald suggests that the cup not only represents the pain of dying on a cross and being betrayed by disciples, but the agony of separation from the Father. Though Jesus saw in that cup, himself being made sin, and with that remaking he would necessarily be separate from the Father, He prays God's will be done. He prays in complete submission to God.
When we cry out to God, "but Father I don't want to," God already knows. It is honest, and then we add, "Your will not mine." The second part is submissive prayer.
MacDonald moves to persistent prayer as the third idea, noting that Jesus, after checking on the disciples again, returns to pray; Matthew 26:43-44. MacDonald spoke of persisting in prayer until the prayer of submission gets from your head to your heart.
I reflected that it is the same for forgiveness. That we forgive seventy times seven, often the same offense, persisting until the forgiveness gets from our head to our hearts.
MacDonald went on to say that persistent prayer may change our circumstances, but always changes us. So too, with persistent forgiveness.
Finally, he spoke of victory through prayer, not victory in worldly things, though that is also possible, but as the Holy Spirit fills us in persistent prayer, He changes us into servants confident that God is leading and He will provide.
Thank you for reading. BEV