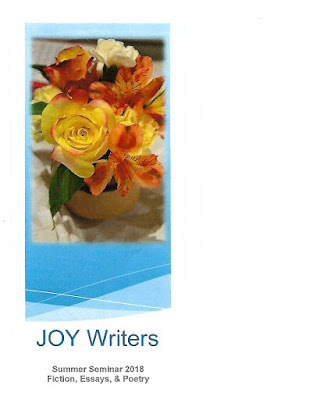 Our Summer Seminar for Joy Writers begins tomorrow. If you are in the Roswell area and interested in honing your writing skills and enjoying good fellowship, come by the Roswell Public Library. We will begin at 9:00 in the Bondurant Room.
The seminar will be led by our fearless leader, Eva McCollaum. You can find her blog here. Speak with her if you would like to join us, or come by.

We read Devil in a Blue Dress by Walter Mosley as our novel for the seminar this year.


Set in Los Angeles in 1948, the young black man easy-going Easy Rawlings, tells his story first hand. Recently fired due to racism, Easy is anxious to pay the mortgage on his home. In the first scene Easy meets DeWitt Albright, a white man  with pale eyes and pale skin, wearing off-white linen. For me the first scene sets up the book in a memorable way. DeWitt continues to live in my memory after several years. He is menacing from the get-go.
Easy reluctantly accepts money from DeWitt to find a young woman, Daphne Monet who likes to associate with black people. The reader watches as Easy Rawlings tries not to take the job, then slowly becomes entangled in trouble. Two of his associates are killed and he is drug further into a complicated web of intrigue spun by Daphne and her would-be love.
One reviewer mentions a favorite character from the book, Mouse who appears about two-thirds of the way through the novel. Mouse is brutal and quixotic, but he twice saves Easy's life. At the end of a passage where Easy and Mouse strike a deal to let Easy call the shots, Mouse says," Whatever you say Easy, Maybe you gonna show me how a poor man can live wit'out blood." It's a telling line and describes how Mouse survives.
I recommend this book if your read noir detective fiction. Read it for the characters, Easy, Mouse, DeWitt and a host of other well drawn people, read it for the setting, Los Angeles in 1948, and finally read it for a study of racism then and now.
Enough for now. Thanks for Reading, Bev

also posted at bacoots.com
Posted by B.A. Coots at 1:46 PM No comments:

In 1972, Three Musketeers released an add campaign for their candy bar claiming it was, 'fluffy not stuffy.' It was an unusual idea for a candy bar. I thought of this add campaign when I heard someone say that God must want her fluffy since most of her efforts at exercise were dashed before they could begin. I laughed and thinking I might claim the line for myself.  Later, I found myself trying to explain to an occasional believer and dear friend, why the line tickled me so.
My friend was appalled at the lengths many believers would go to blame God for our lack of will power, and remarked, "You people are so eager to give yourselves excuses."
"No you see it's only funny because of that very reason," I began, but I smiled and shook my head. Before I could get far into the conversation, I realized that the comment was funny to me because it frivolously embodied several arguments/apologies, the fruits of the Spirit, free will and God's will, and to some extent, false humility.
Self-control is a fruit of the Spirit. The casual comment implied that God had not gifted the woman with that particular fruit. To my mind, that was a charming jumble of human-ness. While the fruits of the Spirit can be considered gifts of God, they are more closely the harvest in humans of a right relationship with God. In this passage in Galatians, Paul tells us what to expect as we humble ourselves before the Lord. He also tells us what we might look for in others to deepen our joy and quicken our hearts. Paul begins by calling us free, and gives us a discussion of the considerations of our free will, within God's will. "It is for freedom that Christ has set us free. Stand firm then and do not let yourselves be burdened again by a yoke of slavery," Galatians 5:1. He is speaking of being a slave to sin. In the comment about fluffy, we can see that we have sinned in so many ways, sinned by blaming God for our silliness, sinned by acts of the flesh which Paul lists, see Galatians 5:19-21, and sinned by using our free will to appease our appetites rather than seek a stronger relationship to God.
As for false humility, in claiming fluffiness, we are confessing our lack of perfection by the world's standards. But fluffiness is a cute way to describe something ugly. We are confessing, but not really. In his book, Humility, Andrew Murray puts it this way. "The call to humility has been too little regarded in the Church because its true nature and importance has been too little apprehended. It is not something which we bring to God, or which He bestows; it is simply the sense of entire nothingness which comes when we see how truly God is all, and in which we make way for God to be all." If God were truly all in our lives, our fluffiness would not be an issue because our self-ness would not be an issue. Whether we were fluffy of stuffy, would not be an issue.
For me, the over-arching point of Galatians 5 is that we are freed by Jesus. The Gospel message is true. Sometimes it is light as a fragrant Spring dawn. Free will in side of God's will is a concept best explained empirically and demonstrated in the fruits of the Spirit. We are free, but our will is lessened as we grow closer to God. Our petulant demands to do what we want to do, become memories. Our rights inside of God's will delight us. We are identified by our choices, good and bad and yet God loves us so, that He sent Jesus. We can make a joke at our own expense. We are free to laugh at ourselves knowing that what we mean is, God I long to do better and be better, but thank you Jesus for my freedom. Our gratitude overwhelms us.
Posted by B.A. Coots at 6:09 AM No comments: