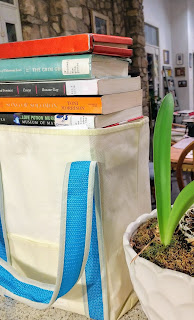 Written by Caroline Fraser,  Prairie Fires is a biography of Laura Ingalls Wilder, her parents, grandparents and daughter couched in a history and discourse of the American frontier.
The biography finds purchase in the final third of the book, describing how the Little House books came about.
In most of the reviews I've read, Little House fans adored Prairie Fires. They cut their 'reading teeth' on Wilder's books, many learning how to read from the Little House books along with how to accomplish many other frontier tasks. I don't disagree that Wilder helped form the frontier conscience of our nation, but I think this was unwitting on her part.
Wilder was not my first read. In fact, my mother tried to get me to read the Little House books but I found the work tedious and too shiny. (Funnily enough, I found Prairie Fires tedious also.) I knew even at five and six years of age, that I was being forced to swallow the Pollyanna without much story. I just couldn't find a footing in the books and if the books were bad the television series was deplorable. My tastes ran more to fantasy, which I knew wasn't real and enjoyed it all the more for it. I mention all of this 'me' stuff because I am an unreliable reviewer for this book.
I admired Fraser's research but became bored with her preaching about the sins of early American governments. This nation is an easy target and often exploited. But as a writer she is surely entitled to her own soap box. I just thought the book would have been a much better read without the discourse.
The other thing I took issue with was the pressure of the 'truth.' Wilder wrote rosy children's books. I think it would be clear that she had help writing them and that she kept to the sunny-side of major tragedies. I see no reason to dive into Wilder's past in order to state the obvious and be so exercised about it that countless references fill the book. Maybe this is unfair to Fraser who is a talented writer and remarkable scholar. Like I said, I am an unreliable reviewer.
So why read the book? If you are interested in the American frontier, read this book. Farser's research is superb.
If you treasured Wilder's series, read the last third of the book. It is a well detailed story, if a bit skewed against Rose. Perhaps Rose was a quarter bubble short of plumb. I am not so convinced in this telling, which seems to rely on Rose's political views as much as other facts. But I did enjoy how Wilder developed her stories and her skills.
The final reason to read this book is to join the discussion which is full and rich and very American. Thanks for reading. Bev
Posted by B.A. Coots at 8:30 PM